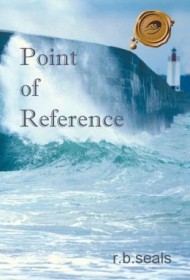 This is the latest collection of rhyming poems from poet R. B. Seals, author of the Words Left Unsaid. The new book’s foreword — following four pages of acknowledgement, dedication, remembrance, and quotes from notable writers such as Robert Frost, Charles Simic, and Paul Valéry — indicates the collection’s intent: “Many of the pieces chosen … tackle topics that we as a community often deal with and even dwell on, but topics we rarely choose for polite discussion.”

For example, Catholics questioning adherence to that faith is a central, if subdued, theme of this collection. Emotional pain is another. “At home, putdowns were norm,” Seals tells us in the gloom-ridden poem, “Failure Analysis,” “And oppressive rules prevailed,” consigning a male family member to worthlessness in the final stanza: “His potential, value and service/ Forever lost — long ago killed.“

Other subjects covered range from cattle grazing in a field, “droppin’ patties just for fun,” to efforts at exposing life’s inner truths by revealing perspectives from which different situations are observed. This motif is apparent in poems such as “Ruminations,” where he takes the part of “Joe Student,“ “detached from current events” with “private fears exposed.”

Seals’ poetic voice feels more logical than lyrically transcendent. His work lacks the vivid imagery that would draw readers into its world emotionally, instead presenting its messages in more intellectual terms (“… a soliloquy that speaks of/Influences that defined and altered his/Character, the encounters that taxes his/ Temperamental heart …”) All of this hampers his ability to engage readers in the powerful and poignant ways he clearly often intends.

Still, Point of Reference should provide an enjoyable read for those who appreciate rhyming poetry and who hallow life’s details, from the momentous — “The valued ideals you embody/ The blessings you freely give” — to the trivial, as in the playful, italicized limericks interspersed throughout the book.