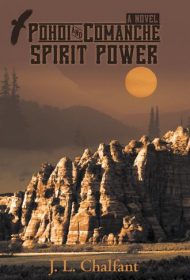 J.L. Chalfant’s Pohoi and Comanche Spirit Power is a well-researched, dramatic novel that opens in a small Comanche village in 1860 West Texas.

Here, 15-year-old Pohoi pesters her aunt Hunts Medicine about the secrets of Spirit Power, even though tribal custom forbids such knowledge to one so young. Nevertheless, the girl persists, making the dangerous climb to Eagles’ Perch, the source of the Power that will allow her to “sing the song of her own creation.”

But soon her world is threatened; the girl’s mother, stolen from a white family as an infant but now married and thoroughly integrated into Comanche life, is kidnapped by Texas vigilantes bent on recovering the lost children, and her father is killed fighting the marauders. Moreover, Pohoi has evidence that Hunts Medicine is aligned with the raiders and resolves to track the Texans, rescue her mother and avenge her father’s death.

As she joins with her “best friend” Yellow Bear, who she secretly hopes to wed, and (unexpectedly) her uncle’s six-year old “captive child” Little Rattler, they confront a host of dangers and discoveries, until a final confrontation.

Central to the plot is an exploration of Spirit Power and how it determines outcomes. For example, Pohoi is guarded by her deceased father (now shape shifted into a cougar), warned of danger by coyote and wolf cries, and aided by a sudden tornado that sweeps away a would-be attacker.

Some may be confused by the piling-on of episodes, especially near the end where Pohoi learns her mother’s fate, the truth about her aunt, and becomes involved in a dispute between Texas Rangers and American soldiers—all while acting with an unusual maturity. Others may wish the main characters were more transformed by their challenges.

But none can deny the author’s highly charged description of events and dedication to her subject. Despite the novel’s drawbacks, readers will appreciate its insight into a largely unfamiliar culture and the spirituality driving it.