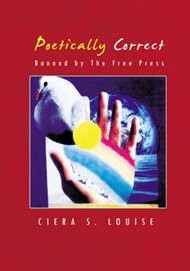 The questioning spirit of the poems in Poetically Correct: Banned by The Free Press makes for a reflective read. Arranged “in the chronological order of my life,” beginning in December 2003 and ending in April, 2011, the organization of these relatively short, mostly one-page poems provides forward momentum for the reader.

Acknowledging C.S. Lewis and Dr. Seuss as influences, Louise’s poems contain those authors’ respective emphases on transcendent morality and a child-like embrace of the wonders of the world, as in the poem “Above All Be Low,” which contains reminders such as, “You are untouchable as the radiant witness” and appreciation for the non-human world, “For now I shall love the moth and crow / The Dog / The Rats / And all below.”

Although there is a critical stance throughout the book, as in “Ancestral Ghosts” with its commands, “Step away! You contagions!/ You parasitic Beasts!/ We see the jailed freedom./ Now your power has ceased / Under all countries / Under all gods,” there is also the yearning for peace and oneness, as in “Reduce Speed: Life Zone,” where Louise writes, “With care and dignity return that smaller being to the earth./ With prayer, blessings and apologies:…”

On the whole, these poems are structurally simple and have prose-like syntax. This collection is not for the reader who is looking for artistic innovation, sophisticated symbolism, or the freshest figurative language. What this collection has to offer instead is sincerity and a passion for “waking up” emotionally to our instinctual potential as human beings, which the author believes we can do if we “Reduce, share, unplug the fear.”