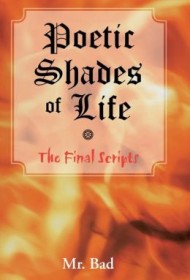 Poetic Shades of Life by Mr. Bad engenders a great deal of sympathy for the author, an Army veteran who writes on the back cover: “The books I have written…are of me being stalked and pressured into homelessness, denied human rights, and mentally terrorized.” Divorced with three children, the author writes in his Introduction about being spied on by various people.

The overall tone of the book follows this sense of anxiety and insecurity and consists of poems, each followed by an explanatory paragraph. The poems are more logical than the prose (which can be rambling and grammatically incoherent) and contain some musical and playful language, as in “Snapper Rapper,” which begins: “Like a great white buffalo he stands out. / With scars from dark nights the herd knows what he is about. / He leads a pack, he’s a decorated scout. / Rap is a snap and he is never to doubt. / He is the kid on the block and he can travel like an astronaut.”

While the collection offers such highlights, the book is produced with an Old English typeface that’s difficult to read. In addition, the voice of these poems often seems divorced from reality, such as the multiple instances in which the author writes about this “young blonde [that is] following me around” and who he has “become so very much in love with,” even though they have “never met and [he has] only viewed her picture on the local radio station’s web-site for which she was employed.”

Some of Mr. Bad’s poems are mildly engaging due to their Mad Hatter-esque logic, and the volume has value as a glimpse into the mind of a narrator suffering from (what seem like) delusions and the life hardships that ensue from these kinds of mental struggles. Overall, however, they lack the literary strength to engage general readers.