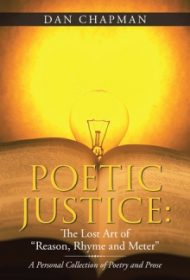 Dan Chapman’s Poetic Justice is a hybrid collection comprised of poems, short essays, and the author’s personal photographs. Thematically, it explores friendship, love relationships, politics, the author’s philosophy of life, religion and spirituality, his travels in Mexico and more.

The poem “Dreams” and the prose selection “Essay: ‘Thanksgiving Day’ or ‘Giving Thanks’” are typical of Chapman’s tone and style. In the former, he writes “Dreams should exceed expectations;/ They form from imaginations./ But, their appeal is often lost/ Because they are mostly forgot [sic].” In the latter, he notes that “Perhaps, Thanksgiving should be less about ‘thanks’ for crops or successes and instead more about giving appreciation…”

As in these examples, the writing throughout the collection is overly expository, conveying ideas and opinions rather than creating a sensory experience for readers. The author relies almost exclusively on abstract, cerebral language such as, “Life’s energy is passion’s trust” and “Depression and war seem cruelest of harms”—language that omits concrete details that would engage readers in a direct, emotional way.

The placement of Chapman’s personal snapshots can also be problematic, as it’s not always easy to discern why they are situated opposite a particular written work. For instance, Chapman includes a picture of himself standing at the Roman Coliseum next to a poem titled “Traveler.” While this might seem a reasonable pairing on the surface, the poem does little to connect the two, offering rather indecipherable exposition: “Tales of submissions’ imagines/ Coerced within our thought/ Send messages of discoveries’/ Blessed feelings once thought lost.” The image of the Coliseum seems mostly irrelevant here.

Chapman’s work would be improved by offering readers more evocative descriptions instead of lectures on abstract thought. As is, Poetic Justice lacks the fresh imagery and emotional resonance of more accomplished work and is unlikely to appeal to serious readers of contemporary literature.