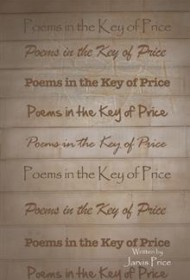 Jarvis Price’s debut collection is aptly titled, as his poems have a pleasant melodic quality. He delivers some turns of phrase so clever they could be slipped into any infectious pop song or ballad. In “A Rule of Thumb,” for instance, he implores: “Allow your heart to embrace such a welcoming place./If for no more than the fact that lust requires mystery while love/requires history.”

Love, and the many shapes it takes, is a frequent subject of Price’s poems. The collection is dedicated to the memory of his mother, and poems like “If it’s all the same to you,” read like heartfelt letters to those he can no longer talk to. Price also meditates on romantic love, gone right and wrong, in poems like “Smitten,” and “After-thought.”

While Price’s anguish and elation come through clearly, he sometimes struggles to strike a balance between being too vague and too explicit. In the poem “Love,” for example, he notes that “Love will make a person persevere through intolerable anything’s.” There have been so many poems written about love that, without any context or specific subject to anchor it, the words don’t have the resonance they otherwise would.

Other poems, like “Something’s missing,” would benefit from trusting readers to come to their own conclusions. It’s clear that the person being addressed in the poem is the “something missing.” When the author announces ” . . . it’s you” in the last line, it feels redundant.

In contrast, the details in “I ‘Member,” such as “…the sizzling sound of hair burned from the hot-combs /in front of Granny’s oven” strike the perfect note, and suggest the possibility of a future project involving a modern twist on Joe Brainard’s classic I Remember.

Poems in the Key of Price is a sincere and soulful effort that displays intermittent sparks of talent. While Price has much growing to do, the fledgling poet shows promise.