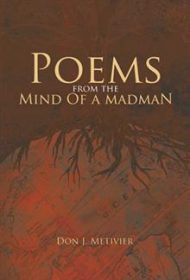 Don J. Metivier’s Poems from the Mind of a Madman is an eclectic collection comprised of 107 lineated poems, some written in rhymed couplets and quatrains, others in free verse. As the subtitle suggests, there’s no central concept guiding the speaker’s musings, although a majority of his poems are rooted in depictions of the natural world and a number address war and military service.

The book’s mood varies dramatically, from despair to elation, confusion to certainty. In “Chocolate Lover,” the speaker is enthusiastic and upbeat: “Oh chocolate, grown in many places/ Bitter beans put smiles on people’s faces.” By contrast, “Just Thoughts,” offers a contemplative, anguished tone: “Why can life become so complicated?/ Could it be that life is overrated?”

While the ideas here can be interesting, the execution suffers from a lack of fresh imagery and original use of language. Many times, the poems are prose-like, such as “Does the Present Exist?”: “Why does the future haunt me?/ Gone is the past, but I can’t let go.”  And when the author does attempt imagery, it can be confusing and muddled: “Too much pride can scar/ Like Iron that turns to rust/ Too deep to rescue, too far/ How deep the scar of trust?”

There is no narrative progression linking these poems or theme-based sections to provide structural cohesion. As a result, large tonal shifts frequently jar readers.  For instance, “Loss and Rejection” is unabashedly morose: “The pain of loss and rejection are like no other/ My first wife’s rejection and the death of my brother…”  The poem that follows, “The Best of Being,” is peaceful, joyous and self-assured:  “I can see so clear from here […] For I am a resonating being/ Connected to all things.”

Such issues make for an uneven and sometimes perplexing read. Revision with an eye to organization and compelling use of language would greatly improve this offering.