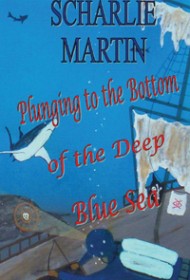 Plunging to the Bottom of the Deep Blue Sea is a thriller with an interesting twist but an unlikeable character at its heart.

The story starts out with a shocking event: In the opening chapter, the main character, Russell, follows his soon-to-be ex-wife, Maria, to Florida and shoots her with a bow and arrow, ostensibly for leaving him. After his attack, Russell takes off in a car, driving aimlessly, trying to escape before the police find out what he’s done. Things change drastically when he witnesses the kidnapping of a young girl, and that event sets Russell on a new course: bringing the abductor his own brand of vigilante justice.

Russell is not an easy narrator. He seems impulsive, making bad decisions because of his mental state about Maria, and his actions don’t endear him to readers. In fact, he’s quite difficult to like; once he finishes with Maria, he continues driving aimlessly around the city, stopping only to fire another arrow at an innocent man on the beach, justifying the act with the lame excuse of throwing the police off his trail. Later, when he finds himself excited by the sight of a six-year-old girl’s short dress, Russell solidifies himself as an unlikeable and distasteful character, even though he’s ashamed of his feelings.

The novel is well written in terms of grammar and style, though parents should take caution that while the cover gives the impression that the book might be appropriate for a young adult audience, both the language and subject matter (sex and violence) are intended for mature readers. That fact is disclosed on the back of the book. And while Russell redeems himself partially in his vigilante quest, he never becomes a likeable character or one that readers feel connected to emotionally.

As a result, there is no one to root for in the story, and the novel is unlikely to please a wide audience.