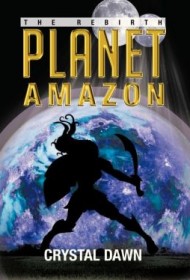 A military officer finds more adventure than she can handle when she hurtles through a portal between worlds in this debut novel by Crystal Dawn.

Dawn’s heroine is U.S. Army Colonel Andrea Staton, a 40-something officer in the Army’s “Science Division,” with no husband or children. In a startlingly brief introduction, given the breadth of the main narrative, Andrea explains that she discovered the lost city of Atlantis, where she found a portal to the futuristic planet Amazon.

Initially, Andrea’s captor is Amazon’s Queen Lydia, who explains that her world is at war with the nearby planet Gallegos, whose cruel king regularly raids Amazon for female slaves. The described environment has a bit of the kitschy flavor of the 1980 Flash Gordon movie, with swords, laser guns, and spaceships.

Winning Lydia’s trust, Andrea immediately morphs into a skilled warrior, fearsome at hand-to-hand combat and known to her enemies as “The She-Devil.” But despite all this galactic warfare, the novel’s underpinning tone is soap operatic with a hint of Fifty Shades of Gray.

It turns out that Andrea is zealously polyamorous. First, she takes up with a muscular blond warrior in Lydia’s army. Next, she hooks up with a slave who was brought to Amazon in his adolescence. Soon after, they capture Prince Daval of Gallegos, who falls effortlessly into Andrea’s lusty orbit.

Surprisingly, all of Andrea’s “guys” rarely demonstrate anything resembling jealousy, conveniently taking turns bedding her. While Dawn explains this away as the result of a genetic experiment, it’s still a bit off-putting.

Overall, Andrea’s fish-out-of-water romances lightly recall the steamier side of Diana Gabaldon, while her complicated love life lacks the petulant rivalries of the Twilight series. The text is dense, and dialogue is written without paragraph breaks, often making for a challenging read.

Overall, Planet Amazon is a lengthy, theatrical mix of PG sex and space opera. Despite its flaws, it might intrigue those who appreciate such plots.