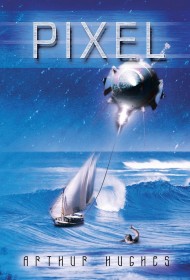 Pixel is an uncommon mix of historical fiction and science fiction, geared, by all appearances, for a young audience. (The book jacket offers no clues about the intended audience, though the storytelling seems clearly aimed at younger readers.)

The titular character is a young space traveler from the planet Larth, the only occupant of a spaceship designed by his father. He lands on Earth in 1776, only to discover that Earthlings are giants by comparison — he appears about one-inch tall to them.

Pixel quickly finds himself helping rescue two colonist children who are abducted by members of a Native American tribe. The kidnapping is soon resolved, and Pixel learns English from the children, Sally and Adam, and their mother, Mary. He later helps with the rescue of the family’s patriarch, Bill, from a British prison. More adventures follow when Pixel is joined by fellow travelers from Larth.

Injecting sci-fi elements into a historical tale is an interesting approach, and Pixel doesn’t lack for ideas, covering a lot of territory both metaphorically and geographically, while also finding time to touch on social and political issues. Unfortunately, the expansiveness also undermines the reader’s engagement. Pixel fails to focus on any single overarching plotline and follow through, instead diverging into various adventures, some of which relegate Pixel to the periphery of the story.