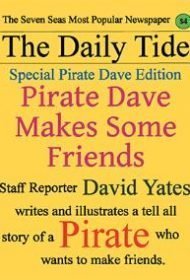 Pirate Dave, a bespectacled, rainbow sock-wearing fellow, looks nothing like a stereotypical pirate. Nor does his sentient ship, The Salty Dog, decorated with large smiling suns on its sails, look like a standard-issue pirate ship. But people constantly assume that Dave is mean, like other pirates. And The Salty Dog is plagued with barnacles.

To solve the former, Pirate Dave decides to sell some of his strange and wonderful treasures in a port town, to demonstrate his good intentions. After Dave displays his Jar of Baby Comets, Strawberry Milk Cow, and Transformatron, the three-eyed Emperor Zoid appears from the undersea city of Aquatropolis. The Emperor rids Salty Dog of its barnacles, then declares that Pirate Dave and Salty Dog are now “our friends.” At book’s end, Pirate Dave and Salty Dog sail off in search of new treasures.

The book is an attention-getter, starting with its cover meant to look like a newspaper (The Daily Tide). The interior text features fonts of different sizes and colors, which help emphasize words as needed and add another note of interest for young readers. Yates’s illustrations are bold, spirited and include plenty of amusing asides and visual gags, like an “after school school of fish,” or the complex formulas on Emperor Zoid’s garb.

The author’s wacky storytelling style is hard to resist. Still, the book is not without flaws. There’s a noticeable missed illustration opportunity, as the townspeople who become Pirate Dave’s friends are never shown. Also, the text includes many capitalization and punctuation errors and a few misspellings (“Emporer” vs. “Emperor,” “where ever” vs. “wherever,” etc.)

With simple revision, the book would be a more certain hit. Even without changes, however, the energy and originality that explodes off the pages is exhilarating, and youngsters should find Pirate Dave Makes Some Friends an enjoyable and exciting read.