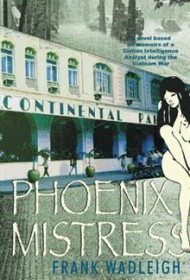 An American civilian must weigh his moral obligations against duty to government as he stumbles upon a covert CIA operation at the height of the Vietnam War.

“Bored with my routine computer job in the Southern California defense industry, I wanted some adventure in my life and decided to accept an offer as Senior Intelligence Analyst with an American computer company under contract with the U.S. army in Saigon.” So begins this atmospheric but meandering first-person account of a young American civilian working in Saigon during the Vietnam War. Unfortunately, the protagonist gets a lot more “adventure” than he bargained for as he uncovers unsavory details about “Phoenix,” a program underwritten by the CIA to keep the Viet Cong under control.

Mostly written as a series of diary entries, the novel effectively transports readers to the Vietnam of the late ‘60s with its cyclos and noodle shops and stifling humidity, life proceeding despite the American presence. Unfortunately the plot’s anchor, the Phoenix program, remains underexplored. The protagonist tussles with its darker implications early on, but the rest of the novel is filled with mundane activity. As the novel progresses, the author uses increasingly shorter diary entries to try to fuel suspense, but they aren’t backed by noticeable action.

The plot is also hampered by staccato sentences (especially when detailing the layout of Saigon) and confusing acronyms: CORDS, PIC, VCI, and more. In the end, the lack of a compelling linear plot to propel the narrative leads to a story that stalls and grinds to a halt well before the novel’s conclusion, despite its three-dimensional characters.

The result is a germ of a good idea that could have benefited from being teased out to form a much more muscular story.