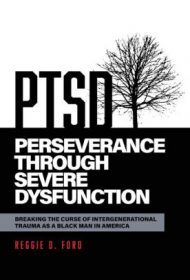 In this memoir, author Reggie D. Ford uses his life experiences to poignantly illustrate the challenges a black person faces in America.

As a child, Ford suffered many traumas: poverty, an unstable family, untimely deaths of people close to him, neighborhood violence, abandonment and rejection. He came to understand that it took a toll: His shyness was actually anxiety, he writes, his “slumps” manifestations of depression, his desire to be alone a way of avoiding feelings of abandonment.

While he became a successful student, athlete and businessman, he later came to believe he was part of a cycle that has plagued black Americans. He watched his father selling drugs, for example. Taking the cue, he started selling baggies of sugar to his schoolmates. In his childhood world, trying to beat the system was a way of life. So it felt natural to tap into an apartment building’s cable TV system and provide cut-rate service for residents.

Then there’s the racism. While his experiences were relatively minor—buying a pack of gum while browsing at a store so clerks wouldn’t suspect him of shoplifting, for instance—these incidents contributed to his mental stress.

Ford broke the cycle through determination, professional counseling and other support systems. He attended Vanderbilt University, where he played football, and now heads his own wealth management company. But success brought financial demands from family members, disapproval from those who resented his accomplishments, etc. Eventually, he cut himself loose from those who would perpetuate his misery.

Ford is skillful at articulating the problem of intergenerational dysfunction. While this is almost solely a memoir, he offers useful bits of advice, such as not to aim for perfection, but for steady improvement. His writing is clear, from the heart and has impact. Readers will feel his suffering and find satisfaction in his ultimate success.

Ford’s audience goes beyond black America. White readers will also come away with a better understanding of a timely national issue.