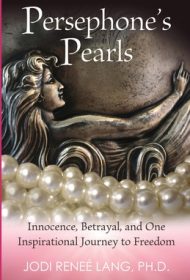 In Persephone’s Pearls, Jodi Reneé Lang describes overcoming a childhood of incest and violence to become an internationally recognized speaker on healing abuse and trauma.

Following an idyllic early childhood, the author recounts the shocking, “relentless” sexual abuse perpetrated by her father against her eight-year-old self in the 1960s. In addition to rapes and sodomy, her father was violent and threatening, even terrorizing his children at gunpoint. Lang recalls blisters and welts on her legs and black eyes from endless beatings.

Lang’s parents divorced when she was 12. Her mother worked and attended university, largely neglecting her children during this period. To escape her family, Lang married at 18, divorcing four years later. Through her studies in education and psychology —she earned two master’s degrees and a Ph.D.—she began confronting her traumatic childhood, a healing mission furthered by Holotropic Breathwork and ingesting sacred plants. She has since aided “thousands” in their journeys to wholeness.

The memoir’s second half is largely devoted to Lang’s health. In 2013 while living in Croatia, Lang was diagnosed with coronary fibrosis. Weak and alone, she navigated this physically and emotionally challenging period through daily meditation, music, and surprising friendships.

Readers will share the author’s terror and emotional pain throughout this compelling narrative. Her candid, direct writing style delivers haunting imagery and evokes deep empathy for a vulnerable child. Descriptions of her emotional healing are equally relatable.

A few gaps and inconsistencies can be distracting. For example, she calls her second husband “one of the greatest gifts of my life,” yet he disappears entirely from the story following their marriage. Further, while her cardiac condition was clearly traumatic, the space might have been better used to convey additional detail about Lang’s professional experiences and travels as related to her personal growth.

This book is sure to resonate with childhood sexual abuse survivors or those who seek to help others, and may also aid readers in their own healing quests.