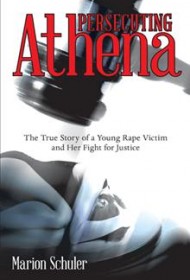 Persecuting Athena, by Marion Schuler, is the author’s account of the battle between her family and the justice system after her daughter, Athena, reports that she has been raped by an acquaintance.  When the police decline to arrest the boy and prosecute Athena for public mischief instead, the author begins to suspect she and her family are under attack simply for reporting a crime.

Persecuting Athena is not written in the journalistic tradition of true crime, but instead as a diary with the author recording dates and events as she recalls them, adding her thoughts and feelings about them in italics. This quickly becomes confusing, with some entries written in present tense, others in past tense, and some losing the italics altogether. The facts of the case, Schuler’s disdain for the police, and the ensuing emotional toll are repeated so frequently and often in the same language that it feels as if readers are re-reading entire passages.  Misspelled words and grammatical errors abound.

The author’s suspicions of persecution from the legal system rely heavily on documents that aren’t included in the book, leaving readers disoriented. Schuler’s rage toward the first officer who interviewed Athena becomes the overwhelming focus, causing Persecuting Athena to often feel more like a rant than a memoir.

Schuler is persuasive in her argument that parents must explain the definitions and consequences of rape and consent to their children and stress the frightening frequency with which it occurs between acquaintances, but the book does not provide any clear call for action; the author offers no suggestions beyond the mention of a few websites. The book also falls short as a cautionary tale about the legal system, because Schuler’s evidence is too scarce and, at times, even contradictory.

Due to the flaws mentioned, Persecuting Athena isn’t likely to hold educational value for general readers. It will undoubtedly serve as a catharsis, however, for the author and those close to her.