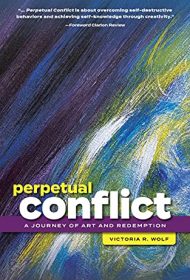 In Perpetual Conflict: A Journey of Art and Redemption, a graphic designer chronicles in raw detail the intense emotions stirred up when she begins to paint.

After her gluten-free business closed, Wolf took up painting to help her “mourn and move on,” but found her creative efforts triggered old wounds. An anxious perfectionist who insists on teaching herself, Wolf’s expectation is to “succeed”; she wants her painting to be “good” when she’s just learning. But as an untutored beginner, this sets her up for recursive rounds of frustration, self-hatred and rage.

In addition to describing “meltdowns” at the canvas, Wolf explores her deep-seated acrimony towards her adoptive mother (“The Witch”), her ex-husband (“The Cactus”), and an uncooperative investor in her business (“The Naysayer”).

After three months of painful self-confrontation, Wolf finally finds some freedom of expression in her painting and some hard-won discoveries about the source of her mental anguish—that the persistent voice in her head she calls “Bleak Victoria,” for example, is the traumatizing, internalized voice of The Witch.

There’s a difference between writing for catharsis—to process powerful emotions—and writing for readers. Wolf collapses this distinction, asking readers to bear witness to every self-recrimination, grudge, and injury, and the self-loathing scripts of Bleak Victoria. The only other real figure in the book is “My Person,” who offers support and praise. The lack of conversation with teachers, mentors, or indeed anyone leads to an airless, even suffocating narrative.

While the prose is clear and lively, the emotional register veers between expletive and conventional self-help language, which restricts insights the book can convey. Bright spots are the paintings that accompany each chapter, which are full of bold color, texture, and movement.

Readers who enjoy frank confessionals or share Wolf’s issues might find her struggles illustrative. Those who have already won their own fragile self-acceptance or who cherish the artistic process for its joy and messy self-discovery might flinch from Wolf’s howls of pain.