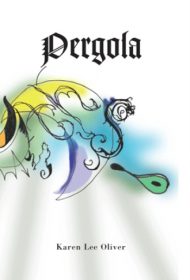 Divided into sections with evocative titles such as “Pearls,” “Memoirs of a Butterfly,” “Dark Siren,” the book contains poems that often hint at decay, such as “An Orange in the Dead of Winter,” which begins “The ferris wheels have long ago stopped./ The sultry sun of summer/ That warmed the daring riders,/ Has sought other climes,” and “Hands at Sea,” whose first lines describe a ship falling apart: “Wooden plank boards groaning./ Gaping chinks splitting her sides.”

Some poems have a more spiritual bent, but they, too, are dark and allude to the inescapability of human fate, such as “Where the Sun is Forbidden to Shine,” which contains the lines: “Souls depart from here/ In an eternal exodus –/ Ever downward./ Hades mocks this place!” Oliver especially excels at presenting gothic hellscapes, and these pieces offer vivid imagery, musicality, and thematic coherence.

The lighter pieces are quirky and offer surprise, such as “Grandmother’s Kitchen,” which ends with charming ambiguity: “Say what you will,/ It’s O.K. here,/ To laugh at your/ Goodbyes.”

Sometimes, readers may want more specificity, as in “The Wizardry of the Woods,” which contains a scene that feels generic: “Nearby there is a small spring of water./ I watch for it as my feet tred [sic] on mats of thick moss./ The air is full of scent and butterflies.” Water, moss, and butterflies are frequent images in poems, and Oliver could have done more with the scene.

Oliver’s poems are clear and have a strong sense of voice. They could possess more compression at times, and occasionally feel too prosaic, with words that aren’t always necessary. Overall, though, readers who enjoy moody, fantasy-inflected atmospheres will find elements to admire here.