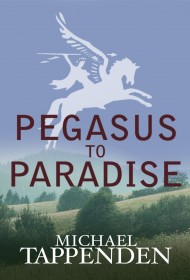 This admirably earnest but uneven novel, rich in atmospheric detail, offers a depiction of a working class British family and their milieu in the years before, during and after WW II. Based on the real lives of Florrie and Ted Tappenden, who marry in their village church in 1937, the plot follows the vicissitudes of their lives as war leaves irrevocable damage.

Drafted into a glider unit that crash-lands in Normandy on D-Day, Ted’s participation in the brutal conflict culminates in the battle of Pegasus Bridge, in France, which partially explains the (unfortunately puzzling) title. The “white hot images” that are “branded into Ted’s soul forever” result in PTSD (although not identified as such in 1945), and psychological complications threaten the Tappendens’ marriage and the well-being of their two sons. Florrie, meanwhile, carries on with doughty courage but shows mounting evidence of an eventual bipolar diagnosis.

Tappenden is capable of graceful and accomplished writing, as in this lovely moment: “She ran her hand along the rough concrete wall that bordered the road and touched the small smooth pebbles embedded there. Each one felt like a nugget of memory to be opened by her fingertips.” Numerous passages display his keenly observant eye for local color, landscape and social nuances. The chapter in which Florrie and her sons go hop-picking in Kent is especially colorful and skillfully indicative of class differences conveyed by vernacular speech.

Ultimately, though, the novel falters. As the narrative proceeds, pedestrian dialogue weighs it down and slows momentum. In the book’s latter part, the author seems intent on recounting every event in the Tappendens’ marriage (e.g., Florrie’s leadership of a cub scout unit), and the novel shrinks from the universal to the petty and mundane. These factors are likely to deter many from completing the final third of the novel.

This is a shame, as there is much to appreciate here. Those who persevere will find a harrowing but moving conclusion.

BlueInk Heads Up: This novel is likely to hold greater appeal for British, rather than American, readers, as it is replete with British terms. While some are defined in a brief glossary at the end of the book, others are not and will leave non-British readers in the dark.