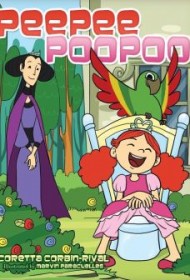 Bedwetting can be an embarrassing problem for young children, and Coretta Corbin-Rival addresses the issue in her amusing but thoughtful picture book Peepee Poopoo.

The main character, Princess Abigail, enjoys an idyllic childhood—until readers are told of her mother’s sudden illness and death. “Soon thereafter” her father takes a new wife, and Princess Abigail’s inner turmoil manifests itself in her bedwetting during the night. The new stepmother calls Abigail lazy for not using the potty, and soon she and the castle servants are referring to Abigail as “Princess Pee-Pee Poo-Poo.” Abigail tries avoiding water before bed, but nothing helps until Hubert, Abigail’s pet parrot, advises her to remember the happy times with her mother. Abigail then awakes to a clean, dry bed, and her stepmother apologizes to Abigail in front of everyone.

Scatological humor goes a long way with the pre-school set, and it’s likely that young readers will be laughing at Peepee Poopoo before the first page is read, simply by virtue of its title. Abigail and Hubert are appealing characters, and the full-color illustrations by Marvin Paracuelles are bright and expressive.

The elephant in the room is the relationship between Abigail and her stepmother. Reminiscent of older fairy tales, Abigail’s father is beloved by Abigail but absent during the bedwetting trials, and her stepmother seems to take on the classic role of a new queen who doesn’t want to be bothered by her stepdaughter. There’s a distinct lack of sympathy present when a stepmother calls her new stepdaughter names, but after the bedwetting issue is solved, “Although [..] the new queen was nothing like her real mother, they both learned to love each other,” and “Abigail gradually became happy.”

Although Peepee Poopoo leaves the psychological ground relatively undisturbed, it earns kudos by endorsing an “adapt and move on“ attitude. Peepee Poopoo is a pleasant tale, well told, that will particularly resonate with children whose situations echo Princess Abigail’s.