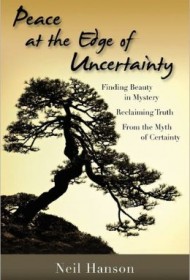 In a stream-of-consciousness memoir taking the form of an open letter to his deceased father, Hanson explores and explains a profound spiritual connection to something larger than himself (i.e. God), which he was unable to comprehend fully until he sat at the dying man’s hospital bedside.

Recalling an out-of-body/near-death experience while unconscious during a high-school wrestling match as his first proof of “being a conduit for G-d,” he describes other incidents throughout his life when he longed for and was rewarded with divine guidance. Although he read about different Eastern religions during his search for meaning, at journey’s end he embraces a rather traditional, universal point of view about man and God, acknowledging that a dimension beyond himself must have shepherded his search for spiritual fulfillment.

Hanson’s ongoing battle between the “soul within and the ego without” reflects his struggles with uncertainty, denial and dysfunctional relationships. While he endeavors to understand why his own enlightenment had to come through personal suffering and loss, he accepts the majesty of Nature and the power of prayer.

Hanson tackles some difficult and elusive concepts here as he tries to integrate many diverse beliefs into his own (he refers to a genderless God as both “He” and “She”). While his discussion of these ideas is often superficial, his life stories are both engaging and inspiring. This book will appeal to the Recovery community and fans of Neale Donald Walsch and Louise Hay.