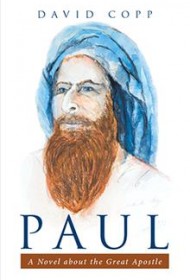 Paul: A Novel about the Great Apostle, is a fictional telling of the life of the apostle Paul. A fiery character, Paul is famous for persecuting Christians, then dramatically converting to Christianity and becoming the foremost leader in bringing Christianity to the Gentiles.

Author David Copp attempts to reveal new insights into Paul, but, unfortunately, his effort comes up short. The book is written in a confusing, first-person style, with the “I” character changing several times per chapter.

Paul begins with a full retelling of the story of Jesus: astrologers predicting his coming, then his birth, ministry, death, and resurrection. Paul is not a player in any of these events, so, other than a quick mention that he was born, he doesn’t enter the story until Chapter 4.

Once an adult, Paul zealously persecutes Christians until he is literally knocked off his horse and temporarily blinded by God in order to change from persecutor to follower of Christ. This major scene takes up only one page in the book and is told without any real insight into Paul’s internal thoughts and struggles. Furthermore, Copp’s confusing first-person style becomes a real problem when he doesn’t confirm for the reader for a full six pages that the person having this major conversion experience is indeed Paul.

Other confusing details include a character switch: On page 5, Herod’s son is Antipater, but on page 23, Herod is Antipater’s son: “Antipater and his son, Herod the Great.” And the name of Paul’s childhood mentor is Socrates, yet Copp doesn’t explain that it’s not the famous Socrates until several pages later.

Copp has done some solid research and relates interesting details about each new city Paul visits as a missionary. He carefully follows biblical facts in telling Paul’s trials of being stoned, beaten, and jailed. As a result, readers interested in the Bible and Christianity may find moments to appreciate here, but the book requires overhaul before it’s ready for a wider audience.