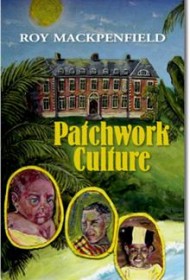 In Patchwork Culture, Jamaican-born Roy Mackpenfield makes an adventure of returning to his native country after living for more than 40 years in Wales. His mission is to uncover the details of this island nation’s historical roots.

Mackpenfield, aged 62 and partially sighted, squelches his doubts about his deteriorating vision and his ability to write effectively in order to meet his childhood friend, Copey, at his home in Jamaica. Thus, he begins his journey sitting on Copey’s veranda, a restful spot overlooking a breathtaking landscape. But he doesn’t sit still for long. Mackpenfield soon retraces the steps of his forefathers while also listening to tales of the Maroon nation (descendants of Jamaicans who were enslaved by Spanish captors and who eventually escaped to the island’s interior), and gaining great insights into the history that has shaped his personal and cultural identity.

Combining historical details with personal stories, Mackpenfield touches on topics as diverse as slavery and rebellion, Rastafarian ideology, ganja (cannabis), and necromancy ( the art of maintaining power over evil spirits). Bringing such varied subjects into a single narrative allows him to construct a story that resembles a patchwork quilt and mirrors Jamaica’s patchwork culture.

The author’s transitions between historical details and personal stories can be jarring at times, but when Mackpenfield seamlessly blends his experiences in modern-day Jamaica with their historical context, the narrative both informs and engages readers. Attending an annual celebration in Accompong to commemorate the Maroons’ 1738 signing of a peace treaty with the British, for example, Mackpenfield describes the festivities while detailing the historical significance of the event.

In the beginning of his book, Mackpenfield says that he wants to leave his grandchildren with a greater sense of their Jamaican identity. He more than accomplishes this purpose. In writing a narrative that has historical value, Mackpenfield has delivered a story that will appeal to those well beyond his family circle.