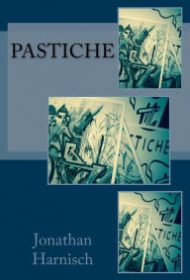 The fascinating New Mexico writer Jonathan Harnisch fights a constant battle with schizophrenia, and his work tells of the sleepless, compulsive thought-rushes that mark this tragic disease. “Is writing the end-all cure to my mental maladies?” he asks in one of his touching author-asides. Readers will hope so as they take in this 800+-page swirl through the boiling cauldron of his fears, dark visions and self-doubts, all of it inhabited by characters Harnisch has featured in past books.

In Pastiche, Benjamin J. Schreiber reappears as “Ben J. Schaffer,” the tormented former prep-school boy who robs a bank with only his cellphone as a weapon, struggles with familial and sexual demons and, like the author, is afflicted with schizophrenia and Tourette’s syndrome; Ben’s imaginary doppelganger, the self-destructive libertine Georgie Gust in other work, is now “George Schaffer”; the conniving siren who’s tempted them in earlier books, Claudia Nesbitt, is recast as “Vivienne Babylon,” a “lascivious redhead with fiery green eyes.”  As always, two or three psychiatrists weave in and out of the narrative. Pastiche is an apt title: the story swirls, circles and turns back on itself without apparent design.

Harnisch’s tangled plots and abrupt shifts of tone can be hard to follow: One moment, an “angel/demon/mother” figure hands Ben a blue-steel .38 and urges him to blow his brains out; later, Harnisch relaxes in the tender ministrations of his loyal wife. Still, to read Harnisch at his raw, unedited, best (the case here) is to witness an event you can’t take your eyes, or your mind, from. He commands attention, respect and . . . sympathy.

At one point, Harnisch acknowledges the problems his work presents. “Sz (his code for schizophrenia) causes my writing, my blah, blah, blahing to come across as being cryptic,” he laments. Even so, readers will appreciate Pastiche as another vivid and compelling example of Harnisch’s keen and disordered mind at work, in the throes of schizophrenia, seeking freedom.