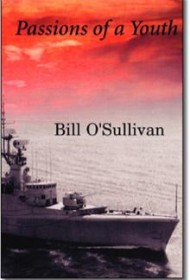 The sailors’ adage of having “a girl in every port” clearly applies to author Bill O’Sullivan’s character, William McCann, a British teen who shares his many romantic escapades while serving in the Royal Indian Navy in the 1940s and later while working for a cruise ship. The title page indicates that the book is a “true description of events and episodes that took place,” though names have been changed to protect others’ privacy. The experiences of the book’s main character, William, appears to reflect the author’s own life.

William recounts his naval experiences during important historical moments, such as the 1946 Indian Naval Mutiny, rioting in India, Mahatma Gandhi’s assassination, and the partitioning of India to create Pakistan when the British withdrew in 1948. He also discusses his onboard ordeal during the near destruction of his ship as it pitched and rolled during a fierce hurricane.

However, the bulk of the book focuses on his sexual encounters with 20 women in a period of about six years, sometimes two-timing, once having sex (separately) with both a mother and daughter, and twice getting engaged, then breaking it off. All of the women, it seems, were gorgeous, with wonderful figures and faces, shapely legs and come-hither eyes. He describes much kissing, fondling, sneaking and fooling around. Each woman had something special–that is, until the next sex goddess came around.

While O’Sullivan’s narrative covers several important points in history, he unfortunately fails to bring the depth and passion of those experiences to the fore with the zeal of his detailed dalliances with each new woman he beds. The book is generally well-written, save for minor spelling and punctuation details. However, it is bereft of reflective moments as to how his early experiences later impacted his life. In addition, the ending is abrupt.

While a male audience might admire this sailor’s conquests on shore and sea, female readers are likely to find the content cavalier and off-putting.