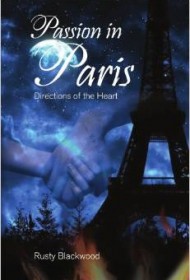 This sequel to Passion in Paris: Connections to the Past begins as the grandchildren of recently deceased Canadian Joy Wychmere discover shocking revelations about their grandmother’s romantic past in diaries and a manuscript left behind. Her story begins dramatically as the married woman, along with her lover, Irish actor Cullen Malone, are being held captive by crazed artist Philip Robealard in a room within a hotel that is ablaze. Joy is bleeding badly from a gunshot to the shoulder and Cullen has been forced to ingest a bottle full of pills. The couple narrowly escapes death, and the balance of the book concerns their many medical mishaps and Philip’s tragic past.

The author works hard at developing her French characters’ speech in strongly affected English, but it feels flawed (“Do not looks at moi that way. It makes moi nervous, so just stops it!”) and quickly becomes distracting. More successful is the hilarious Southern drawl of character Mavis Dempster (“Don’t be pointin’ that thang at meee! Yur hands are a-shakin’ wurse then ma mother-in-law’s stomach . . .”), as well as the ultra-proper English of stern private nurse Chelsea Hewitt (“Wakey-wakey, duckie! Tea time!”). Blackwood clearly knows her way around medical terms and procedures. However, the story line moves at the snail’s pace of a medical soap opera. It also is adjective riddled and depends heavily upon Joy’s long-winded expressions of her thoughts and fears regarding her lover’s precarious health. The book would fare better if the action simply flowed so the reader could decide for himself how to feel and react.

In sum, Passion in Paris spends so much attention to language affectations and ruminations on love that it loses sight of the need for strong storytelling.