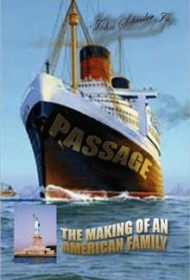 In 1945 when he was not yet two years old, author John Schissler, Jr. and his family began a desperate journey from their farming village in Yugoslavia (now Croatia) to escape the ethnic animosities against ancestral Germans in a Slavic corner of the former Austro-Hungarian Empire. Their search for a safe haven took them through six countries and included experience in a POW camp in Austria, forced labor in the Russian zone of occupied Germany and danger and privation throughout.

Schissler conveys the fear and tension of those stateless years–the hunger, malnutrition, illnesses, slave-like labor–that his parents and three siblings, each born in a different country during their trek, endured. After they emigrated in 1950 to Wisconsin, where they had relatives, however, the narrative becomes less dramatic, as Schissler recalls quotidian details that are sources of nostalgic memories for him, though largely similar to accounts of other newcomers’ experiences.

The family prospered by dint of hard work, and Schissler became a high school English teacher in Milwaukee. Providing a record of his acculturation into a patriotic American, he describes the satisfying moment when he ensured that his parents’ names were inscribed on the memorial wall at Ellis Island.

We have had many tales of wartime hardships and atrocities described by more seasoned writers. Schissler’s lapses of grammar and sometimes awkward or infelicitous phrasing detract from his story. While this memoir is an earnest, well-researched tribute to the unnamed victims of national conflicts, its likely audience may be confined to ethnic Germans in Wisconsin and other second-generation ethnic families.