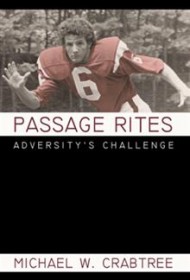 Michael Crabtree first put this story to paper in 1980. He then locked it away for three decades; his wife and children knew only fragments. Passage Rites, he says, is his way of telling the full story of how his life was shaped by events that occurred over a few short weeks in late 1978 and early 1979.

Crabtree recounts losing his college football scholarship after being injured. He quits school, hitchhikes across the country and spends most of the year working in the Texas oil fields. Once home in Virginia, police show up at his parents’ house, tell him he is wanted back in Texas for an armed robbery – his pickup, they say, was identified as the robber’s vehicle – and take him into custody. Crabtree’s nightmare is resolved quickly; he proves he was nowhere near where the robbery occurred and is freed. But he is changed. A loss of innocence, one might say. He also learned a lesson that he carried through life: Never give up, never be afraid to take a new path, whether it’s your choice or something that’s forced upon you. “We are the cumulative decisions that we make,” he writes, “and each opportunity is full of unknown possibility.”

Crabtree went on to a successful career in the oil industry. His writing is direct and clear; he keeps the story moving and engages the reader. It’s an interesting tale, not unlike a mystery that needs to be unraveled. Readers will want to find out how he got into the predicament and how he will get out of it. (It appears he was the victim of seriously inept police work.)

If there is a quibble — and it’s minor — it’s that Crabtree’s dialogue sometimes seems like padding. But that doesn’t get in the way of the story the author tells, and tells well.