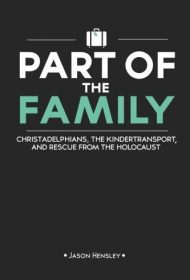 The Christadelphians are a religious community numbering about 50,000 worldwide. Formed around 1850, the group holds a strong affinity toward Jews, much more so than other Christian denominations. That was never more evident than in the years leading up to and during WWII, when Christadelphians sponsored some 250 children who were taken to safety in England from Nazi-occupied territories as part of the Kindertransport.

Jason Hensley is the principal of Christadelphian Heritage School in California. In Part of the Family, he recounts the stories of more than a dozen of these children. Through interviews with survivors and their families, letters, documents and extensive research in Christadelphian records, he sheds light on the Kindertransport and the Christadelphians’ role in the endeavor. As the author notes: “. . . history cannot simply be remembered in batches of statistics and generalities but rather should be seen and understood through the lens of the individuals who genuinely lived this history.”

The Christadelphians who fostered Jewish children, making them members of their families, often did so at great personal sacrifice. Wartime conditions were challenging enough without another mouth to feed, and sometimes their participation put them at personal risk. Ursula Meyer’s foster father stepped between her and a gun-wielding Home Guard sergeant who intended to shoot the 16-year-old German “spy.” “You shoot me first,” he said.

Hensley weaves in wonderful details, such as 8-year-old Elfriede Ransome’s first meal in England: “cottage pie and rice pudding, two things she found revolting at the time.” Or the haunting fact that much of what Hana Holman sold in the haberdashery shop where she worked were black hats and gloves to war widows.

In all, the author has done an excellent job here. In addition to the individual stories, he provides historical context, copious endnotes, more than 100 photos, pertinent maps, an extensive glossary and a bibliography. Readers with an interest in WWII, the Holocaust or religion will enjoy—and learn from—this revealing book.