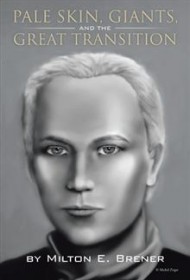 Milton E. Brener’s third scholarly book concerning alien visitations to Earth presents a fascinating hypothesis. The author contends that approximately 50,000 years ago, a visiting alien race, called the “Nordics” by many researchers, interbred with human beings causing major changes, and these alien beings continue to live among us.

The two strongest arguments for this genetic manipulation are the sudden appearance of Caucasian characteristics, such as light skin and blue eyes, and the fantastic technological and aesthetic advances that occurred so swiftly in this historical period.

No one could question the thoroughness of Brener’s research. The book’s lengthy bibliography and hundreds of footnotes bear this out. But, for many, this meticulous approach may hamper the book’s readability. The author spends nearly two-thirds of the book presenting and refuting the possible scientific explanations for the light skin phenomenon, which becomes tedious and redundant, before he finally gets into his more interesting attempts at proving his thesis.

In addition, as he did in his previous Walking Through Walls and Other Impossibilities, Brener primarily relies on anecdotes taken from works by other authors. However, even Brener himself doubts the reliability of many of those other works and their second- or third-hand sources.

Nevertheless, his suggestion that aliens interbred with the human race provides a more satisfactory explanation than the theories he debunks for “white” skin being found only in northern Europeans and their descendants while not in populations in similar northern and southern latitudes. And something must have given a boost to evolution for the amazing progress that took place in a relatively short period 50,000 years ago. Why not the Nordics?

Of all of the authors and posers who are writing about UFOs today (and they are legion), Brener, despite his faults, remains among the most believable, readable and thought provoking.