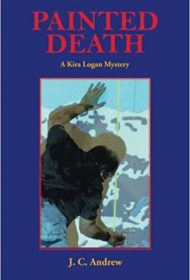 In Painted Death, the first installment in the Kira Logan series, a slew of mysterious deaths in Raven Creek, Australia leads to community-wide discord.

The story begins with the murder of local fish captain Jason Sturdeman. He’s found shot dead, and there are no clues indicating why or who killed him. Residents believe drugs might have been a motive in the death.

Kira Logan, a freelance artist, is commissioned to paint a commemorative mural entitled “Lost Seamen of Raven Creek,” which includes a depiction of Jason’s boat, the Halibut Hunter. The mural is threatened when townspeople object to Jason’s boat being included, due to his suspected criminal activity. When two more people connected to Jason turn up dead, police push residents for answers.

To save the integrity of the mural, Kira acts as a sleuth. As the story unfolds, she draws close to Vin and Angela, Jason’s children, questioning them about Jason and their estranged stepmother Selina’s personal lives.

Andrew is a spirited writer who engages readers with descriptive prose, but passages with unnecessary details that don’t move the narrative forward detract from the story (“To my amazement, one of the women, using several extension cords, plugged a portable sewing machine into the wall…”). Multiple points of view are too numerous to follow, and the many characters lack the needed depth to captivate readers.

Additionally, Kira doesn’t sleuth as much as stumble onto clues to the mystery. For example, in one scene a body is found, and Kira just happens to be nearby. One of the characters tells her where and how the body was discovered, which leads her to ask further questions. A more proactive protagonist, dynamically tracking the crime, would improve the narrative.

Overall, the mystery evolves slowly, and the wait for the reveal may be too long for most. Readers will need to practice patience to get to the satisfying conclusion.