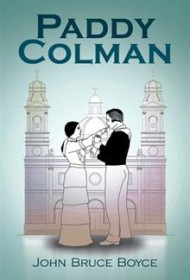 For more than three centuries, the history of Uruguay has been a tempestuous parade of colonization, native revolt, civil war and unstable democratic governance giving way to ruthless military dictatorship–all of it enflamed by frequent economic catastrophe.

The most volatile period of all lasted from 1811, when Uruguay’s national hero, Jose Gervasio Artigas, led a successful revolt against Spanish rule, to 1828, when, after a subsequent occupation by Portuguese belligerents from neighboring Brazil, Juan Antonio Lavelleja and the “33 Immortals” at last won independence for Uruguay, with a little help from Argentina.

It is into this boiling cauldron that John Bruce Boyce, an engineer and history buff from Corpus Christi, Texas, throws the eponymous hero of his competent first novel. Paddy Colman is a fictional character (“Show me a revolution and you’ll find an Irishman,” Boyce’s father used to say), but this handsome, dashing able seaman and sometimes newspaperman fits quite nicely into the explosive political intrigues of Artigas and Lavalleja–especially since the novelist has contrived to make the love of Paddy’s life, a raven-haired beauty he calls Tereza Ferrando, the sister of one of the “33 Immortals” and the best friend of Lavalleja’s own lady love.

To the blood and gunfire of the 500-day Cisplatine War of the 1820s, Boyce adds a great deal of swashbuckling personal adventure and romantic longing (Tereza and Paddy are as devoted as doves), as well as some unfortunate passages of melodramatic prose: “But a life where joy and happiness prevailed over hardship and pain,” Paddy muses, “appeared just ahead. Perhaps this is how divine providence worked.” For the most part, though, Paddy Colman delivers on its promise of action-driven historical fiction, firmly rooted in a part of South America that most U.S. readers know little about.