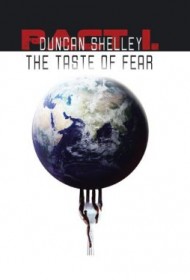 Set in the near future, this thrilling fusion of science fiction and mystery is virtually impossible to put down – an utterly readable novel with an audacious premise.

A group of alien entrepreneurs approaches members of a powerful human secret society known as The Order with a business proposition. They want to purchase lean human meat for consumption: 59.5 million pounds per year. Thousands of people would have to be butchered daily to fulfill the deal. After months of research, the aliens have concluded that fear makes human meat the most flavorful; the victims must be terrified the moment before they are harvested. After being offered what amounts to eternal youth, the human business partners accept the deal that will essentially doom half a million innocent people annually.

When the reaping begins, the rest of the world has no idea what is happening. Thousands of people are simply disappearing every day. Panic spreads.

Although the basis of this novel is initially much like that of the iconic Twilight Zone episode “To Serve Man” – based on a 1950 short story by legendary storyteller Damon Knight – author Duncan Shelley explores this “invasion” scenario by focusing not on the aliens but on a cast of brilliantly unconventional human characters: a precocious 12-year-old girl nicknamed Shub-Niggurath (after a Lovecraftian deity) who is an unstoppable killing machine; a fear-obsessed master detective, Nina Kay, who lives in a submarine at the bottom of the Atlantic Ocean; and a Russian assassin known as the Ghost.

While the slaughter of humans is obviously integral to the storyline, it takes a backseat to the intrigue surrounding these characters. Can The Order stop Nina before she exposes the grand conspiracy? Can a little girl possibly defeat technologically advanced aliens? Is humankind doomed?