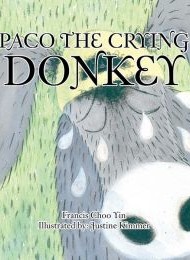 Inspired by the calypso songs of his youth in Trinidad, Francis Choo Yin has written the picture book Paco the Crying Donkey, the story of a donkey whose tears of sadness are turned into tears of joy.

Retired from his working life, Paco arrives at a kingdom for old animals ruled by Oswell, a rooster. Oswell decrees that the animals will hold a ball, with every animal invited — provided he or she brings a friend. Without a friend, Paco is barred from attending the ball, but Paco’s crying attracts four happy spirits originally from the human world. The four spirits summon the Queen of the happy spirits, who intervenes on Paco’s behalf.

Since the story was influenced by the calypsos “Don’t Cry Donkey” and “Jean and Dinah,” it’s understandable that songs would be part of the book, as when the four spirits sing to Paco: “Don’t cry donkey, donkey don’t cry/What they say about you, we know is a lie/You are always happy with us, Donkey/Don’t cry, don’t cry.”

The verses, while each slightly different, become repetitive nonetheless. There are other concerns in the book, as well, particularly the lack of character development. Paco does nothing to get himself out of his predicament, and Oswell’s eventual admission that he was wrong doesn’t resonate, as Oswell never has any actual dialogue; readers are told of his behavior, rather than shown. The text also suffers from flaws in punctuation and consistency of tense.

Justine Kimmer’s illustrations are colorful and engaging, but they aren’t enough to carry a story that doesn’t inspire readers to feel invested in the outcome. Calypso fans might find Paco the Crying Donkey worth a read, but others will find it difficult to appreciate its rhythms.