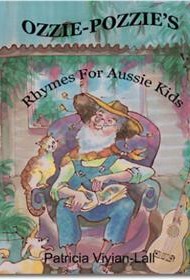 Patricia Vivian-Lall is a professional actress and singer with more than 40 years of experience on stages in Britain and Australia. She has written a quirky collection of nonsense rhymes inspired by the whimsical names of Australian towns and terrain she passed through on her many tours across the country.

Place names are the stars of this collection; Mudgegonga, Coonabarabran, Warrumbungles and Fairy-Hole Creek seem to echo the delight of the Australian landscape. Children will giggle simply on hearing them read out loud. The book stars a jolly assortment of Australian creatures, real and otherwise, from wombats to dragons.

Unfortunately, the rhymes and rhythms of this text can feel labored, and they don’t always make sense. The latter might sound like an odd quibble in a collection of nonsense poems, but the delight of the genre exists within the perfect logic of the made-up nonsense. Simply including random words or forcing rhymes isn’t the same thing. For example: “Tumbarumba! / Tumbarumba! / Won’t you come and / dance the rhumba/In a Dance-Hall/built with lumber/Thus encumber/Tumbarumba?”
In addition to odd capitalization and errors of punctuation (which are unacceptable in a book intended for emerging readers), the final sentence of the poem doesn’t make sense.

Brenda Nelson’s lush watercolors aren’t bold enough to add narrative texture to this collection. When illustrations don’t contribute visual puns or humor to a project such as this, an opportunity is missed to add depth and dimension.

Finally, who is Ozzie-Pozzie? There’s a backpackers’ hostel in Australia by that name (without the hyphen), but no connection is made. In sum, Ozzie-Pozzie’s Rhymes for Aussie Kids can be sweet and diverting, but its problems are many.