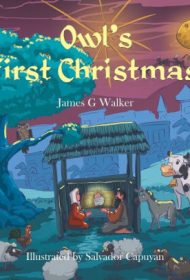 A far-reaching book describing the Santa Claus mythology and retelling the New Testament’s story of Jesus’ birth, Owl’s First Christmas is a comprehensive – if unusual – outline of both tales.

At the book’s center is the trope that an owl’s call resembles a question. For most of the book, a narrator tries to explain Santa to Mrs. Owl, who repeatedly interjects “Whoooooooo?” The narrator becomes exasperated, eventually exclaiming, “Why, Mrs. Owl, haven’t you been listening?” Then the narrator pivots to explaining that Santa Claus is going “to see the baby Jesus and to take him a special gift.” The narrator subsequently tells the manger story, noting that three wise kings also brought Jesus gifts.

Here the narrative shifts to third-person, describing Mrs. Owl watching as Santa gives Jesus the magic of Christmas. When Santa visits her afterward, she says her first non- Whoooooooo?” words, thanking him for the gift of “knowing Jesus as my savior, God our Father’s great gift.”

Owl’s First Christmas feels frenetic, bouncing from the list of Santa’s reindeer to the story of Jesus’ birth. The text is long for a picture book, making the shift in narrative style in the last few text-packed pages even more jarring. This narrative shift extends to the titular character, who suddenly speaks in full sentences about the magic of Christmas.

The illustrations are colorful, engaging and of professional quality but repetitive: One full-page illustration of Mrs. Owl is used 15 times, and the background illustration for text is identical throughout.

The insistence of a firm link between Santa and Jesus is a controversial choice that will limit the book’s appeal for many families, both Christian and not. But even for readers who philosophically agree with connecting Santa to Jesus, the length and unusual editorial choices of Owl’s First Christmas make this an imperfect fit for early readers.