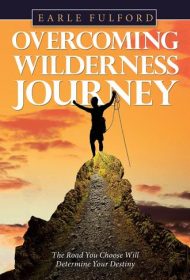 Raised on Grand Turk island, Fulford often skipped class and indulged in alcohol and drugs. At age 16, he was kicked out of high school. Running the streets, he eventually joined the “Black Power Movement” started by activist JAGS McCartney, which turned into a social revolution that ultimately became “the first democratic government of the Turks and Caicos Islands” in 1976. The new government offered Fulford a scholarship to pursue a career in youth counseling. In time, the author embraced Christianity and spent 29 years as a counselor.

Here, Fulford shares how his relationship with Jesus Christ altered his life. Fulford states that “only your creator can provide you with His reason for your life.” He explains that “[t]o overcome this wilderness journey, [sic] will take a sacrifice of your life to Christ” and that the “wilderness” is the “world in which we live…a vast system of this age that Satan promotes and control[s].”

Unfortunately, Fulford’s powerful message is buried in prose overrun with grammatical errors, including improper subject/verb agreements and misspellings. For example, Fulford consistently uses “angle” for “angel,’ misspells “Noar and the Ark” and misquotes scriptures, changing their meaning. He writes: “As what a man thanked, so is he”; this should be “thinks in his heart” (Proverbs 23:7). Toward book’s end, there are long sections of scriptures with no clear purpose.

Additionally, Fulford often glosses over his life’s details. Discussing the dangers of witchcraft, he mentions losing his mind and being “driven into the hills to live in a cave for four years.” He never expounds on this dramatic event or the “miracles, signs and wonders performing every day in and through [him] by God” —all of which would have added interest and credibility to his work.

With professional editing, Fulford’s contribution would better serve the Christian community, which could benefit from his years of experience and insight.