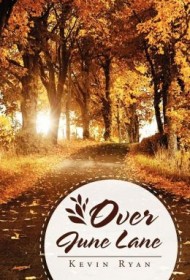 The poems in Over June Lane recount with sentimentality and frequent wistfulness the speaker’s longings for particular lovers and places of his past.

Author Kevin’s Ryan’s work includes both songs of praise for what has been and elegies for what might have been. For instance, in the title poem “Over June Lane,” the speaker mourns the absence of a beloved named Miranda: “Only you Miranda,/ And a dusk upon the hill,/ And what I say in certain suns, / On fields a long-gone girl had run in,/ Is like a longing for morning,/ Gardens wet we met and ran in […]”.

Ryan’s poems are often prosodic and engaging in their musicality. However, the formality of the language lends an antiquated quality to the verse. A notable example is the poem “If I Go to Heaven,” whose first stanza reads,

Ryan’s poems are strongest when he keeps the language simple and grounded in concrete detail, as in “Wish You’d Gone Into London,” which begins:

Such writing is more appealing to contemporary readers than the wordier, denser lines of “Carolyn in Kensington”: “Carolyn,/ A myriad of motives made you muse on me […]” .

Overall, these poems show promise in many of their rhythms and some of their imagery, but the diction and syntax do not reflect current trends in mainstream literary poetry. As a result, Over June Lane is likely to appeal to more casual readers of poetry who favor inspirational/light verse.