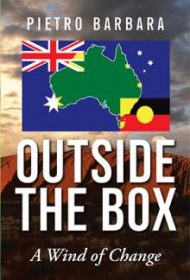 In Outside the Box: A Wind of Change, Pietro Barbara shares his views on how to make a better Australia.  Using a self-described “round-the-campfire tone,” Barbara delivers opinions on such disparate topics as the creation of a new Australian constitution, the eradication of foreign-owned property, and a “public health service funded by a percentage of income.”

Barbara generally devotes no more than three or four pages to each of his topics, and his choice in brevity seems to be governed more by a desire to provoke and “to stimulate discussion,” than to inform or persuade. Thus, he advocates that Australia form a republic and leave the commonwealth, but does not specifically say why this step would engender improvement or discuss why the 1999 Australian referendum on the issue failed.  He promotes nuclear energy as a safe, environmentally friendly source of power, stating that “we have the technology and a huge geologically stable land mass,” without exploring why the incidence of level-six earthquakes in Australia wouldn’t be worrisome.

Part of Barbara’s neglect of explication also seems to come from an assumption that his readers are all Australian with a commonality of background. He gives no statistics, for instance, to prove that Australia exports far more raw materials than manufactured goods, presumably concluding that the status of Australia’s import/export exchange is self-evident to his readers.

Barbara states that he developed his writing style in opposition to his father’s which was complex and inaccessible. But with such sketchy exposition, the merit of Barbara’s work must rely on its gadfly potential to stimulate controversy and response.  Certainly, many of Barbara’s suggestions are controversial, (though not necessarily new) such as legalizing euthanasia for the terminally ill, or banning “sexually explicit acts on TV.”  Mere provocation without developed explanation, however, is thin ground to stand on, and Barbara’s book would need thoughtful revision to attract a thoughtful audience.