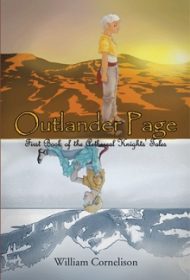 The protagonist in Outlander Page, the first installment of William Cornelison’s promised epic fantasy series, is on a journey of self-discovery.

Vandelas Kronas, the titular knight-in-training, is the son of two renowned warriors and the heir to a mysterious legacy. When the book opens, he’s a simple country boy living in a village outside of the Vermalio kingdom. His father Jerrell and mother Victoriah are both accomplished knights, and Van basks in their glow.

That all changes when a mysterious attacker assaults Van the night of the village’s Harvest Festival. What should have been a fatal axe attack temporarily wounds Van, and in turn uncovers a strange power: The boy gains the ability to freeze substances by contact.

These events spur the young man to follow his parents’ example—a decision that proves far from simple, as his training accompanies revelations about his heritage. A rare offspring of a race with a violent, destructive and gory history, Van must hide his true identity and lineage even as he strives to accept his legacy and potential.

At its heart, Cornelison’s story is a spin on the standard hero’s journey epic. The lengthy novel tracks Van’s progress from wide-eyed youth to grizzled hero against a fantastical, vaguely medieval backdrop. But instead of relying on the standard monsters and magic to illustrate his protagonist’s struggle, Cornelison delves more devotedly into the character’s inner life and emotions.

The author works to invest his narrative with heart, wonder and action, but the results are mixed. He muddles the message and story’s flow with some basic editing flaws; for example, conflicting verb tenses (“Van loved her porridge, the way she crushes the favorite berries of her company and adds their juices to the mix”) and awkward phrasing and vocabulary use.

Even so, Cornelison achieves some poignant and vivid moments in this story—one that may appeal to fantasy fans looking for a fresh take on a familiar theme.