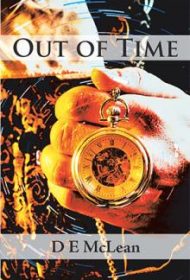 Set in an alternate reality of Grahamstown, New Zealand, the story concerns Capt. Millicent Darlington and her ragtag crew, which includes an assassin, a doctor-inventor and several stray children. Although they usually transport supplies to and from local mining communities, an unplanned mission to rescue a victim from time-traveling slavers disrupts their schedule. Returning the victim to his proper time is even harder than the rescue, as they must build a time machine, which is illegal here, to get the job done.

Elements of the steampunk universe appear frequently. Characters wear leather boots, jackets, chains and round glasses and employ clockwork, gears and steam-powered machines—but no electricity—as a way of life. The doctor’s failed inventions, including an exploding ice cream machine, are amusing examples of the genre. But physical descriptions beyond clothing and scenes unrelated to steampunk are given short shrift, making characters’ appearances more general than specific.

Likewise, the book offers a sketchy story that could be improved with more details showing how objectives are met and illuminating the characters’ emotions. For example, at a celebration following a falsely imprisoned crew member’s escape, showing the event would be more engaging than simply telling what happened: “Over tea and cake, everyone filled [crew members] Phineas and Persephone in on what had been going on in their absence. This took quite a while as everyone had something to say and were frequently interrupting and talking over each other.” How they felt about their colleague’s ordeal isn’t articulated.

By the conclusion, much remains unresolved, and the story ends with “To be continued.” While the novel has engaging moments, fleshing out characters and adding details that show the emotional tolls these adventures take could offer steampunk fans more engaging future voyages with Millicent and her eccentric crew.