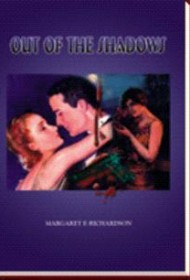 Out of the Shadows, by Margaret F. Richardson, is an historical fiction romantic thriller set around 1960. James Langley, a light-skinned black man living as white, is a professor at the University of Chicago. He is compelled by a mysterious phone call from an old lover to travel back to Ula, Mississippi, and face his past. Still aroused by the thought of his former lover, Langley is nervous about seeing her.

As he travels back to Ula, we learn about Langley’s past through a series of flashbacks. We discover, for instance, that his sister was killed in an accident when he was a teenager and that he intensely hates the man who was driving the car. We also learn about his past love affairs and how he is tortured by his attraction to African-American women, though he glorifies white women. His pattern is to drink heavily, pick up a black woman and then wake up in the morning disgusted with himself.

Meanwhile, as Langley’s past is explored, his current girlfriend discovers she is pregnant but struggles with the information because she knows Langley doesn’t want a baby.

The subject matter of Out of the Shadows suggests the possibility of a subtle, interesting study of race in the years immediately preceding the repeal of the Jim Crow laws. But the plot moves so quickly and is full of so much extraneous action that the story is hard to understand. The reader is left pondering the motivations, thoughts and feelings of the characters, who, by and large, are one-dimensional stereotypes with no inner landscape.

The overcharged plotline and underdeveloped characters make the novel difficult to read, and a profusion of grammatical and spelling errors doesn’t help. As a result, Out of the Shadows is a book that doesn’t live up to its potential.