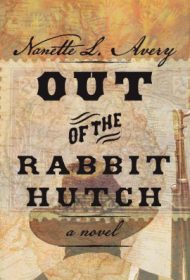 The Civil War is the centerpiece of Nanette L. Avery’s engaging historical novel, Out of the Rabbit Hutch. While the war itself is realized in flashback, it’s bracketed by the impending cloud dominating years before and an intertwined narrative of the broken lives that it leaves afterword.

The author impressively juggles a range of plots and characters that, when first encountered, don’t seem to share common ground but meet and then separate in unexpected ways. For some, the circumstances of these interactions may seem a bit strained, but most will find that the various threads fit together and are well worth following.

The first thread involves a veteran struck voiceless by his battlefield experiences who is released from an asylum to a family farm where he forms a bond with the young daughter, together tending the vegetable garden and caring for rabbits in the hutch. As a trusting relationship between them develops, the author shifts focus to a pre-war whaling voyage and a sailor cast ashore and left for dead on the Australian island of Tasmania by crewmates who consider him a curse on their ship. Rescued by an aborigine wise in the ways of nature and bitter at the cruelties of the British colonizers, the sailor joins forces with his savior and the two book passage for the U.S.

Meanwhile, the cast grows. Among the characters we meet are the sexually and socially dissatisfied wife of the doctor who later becomes director of the asylum housing the silent soldier; a slave-catcher who after the war channels his viciousness in other directions; and two down and out veterans bent on revenge.

Every element somehow blends, leading to denouements of death, violence, betrayal, loss, and occasional trust—all realized against a carefully formed backdrop of a hugely transformational period of American history. The chaos of the times and the way a wide range of characters cope with it is nicely captured in this fine, well-executed work.