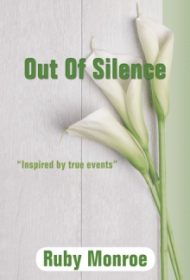 Ruby Monroe uses the third person to tell the story—“inspired by true events”—of her abusive marriage and the strength and support she needed to escape it.

Pregnant at 16, Ruby convinced her distraught mother to let her marry 19-year-old Jason. For the next 22 years, Ruby endured Jason’s escalating rage; his emotional, physical, and sexual abuse; his infidelity and the sexually transmitted diseases to which he exposed her; and the fear for her life and the lives of their two sons Matt and Joey.

During it all, she completed the courses required to become a successful Human Resources executive, despite never earning a high school diploma. Finally, after her sons left home, she found the strength to tell Jason she was moving out—buoyed by her friendship-turned-romance at work with a younger, divorced father and her regular paycheck and benefits. Resisting Jason’s persistent pleas to reunite, she obtained a no-fault divorce and is now happily married to a strong, loving man.

The choice to use a third-person narrator distances readers from Ruby’s pain. This is exacerbated by writing that’s stiff and formal in most cases (with the exception of numerous sex scenes that are related in jarring, coarse language and sound much the same whether the sex is forced or seductive). While there are many clichés throughout (“At home, things went from bad to worse…”; “She was sure she saw fireworks at the height of her orgasm”), one memorable image is beautifully conveyed: “It was a promise she would hear many more times. She learned quite soon that his apologies were like a soap bubble: shivering and empty.”

Although the story takes place from 1955 to the 1980s, the issues it explores—domestic abuse, a wife’s reluctance to expose the shameful truth, unfair work situations—are relevant today. Had Ruby told the story in her own voice, it would have resonated more forcefully with a new generation.