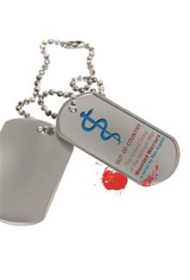 Ron Aigotti’s Out-of-Country is the fictional account of the Vietnam War experience from the perspective of draftees stationed in America.

Physicians Michael Rizutto and Joe O’Mara first meet while awaiting their orders in an Army recruiting station. Having avoided mandatory military service through deferments while they were in college, they must now face whatever destiny—and the military—has in store for them.

From the beginning, it’s clear that Michael and Joe are not fans of the military and find the Vietnam War appalling. They constantly defy the orders of their superiors, and regularly argue with them. Readers will wonder how they manage to suffer no real consequences from such behavior.

While the author touches on a few important issues, including the drug epidemic among vets and the emotional toll trauma war takes on a soldier, not much time is spent exploring them, and the characters’ disdain for the war itself becomes the focus, rather than the casualties of it. Michael and Joe spend most of their time complaining about the inconvenience of having to be stationed in Kansas for two years, referring to their post, Fort Riley, as “the armpit of the universe,” regardless of the fact that the alternative is active duty in Vietnam. With only one passage dedicated to the action of the war, the characters’ blasé attitudes feel elitist and detached.

Typos, grammatical errors, and inconsistencies (Michael’s wife’s name alternates between Cathy and Kathy throughout) further add to the story’s issues.

Aigotti’s novel brings up a few valid points worth exploring, but it ultimately falls short of illumination. Audiences looking for a war story or an historical view of the Vietnam War will likely be disappointed with the perspective presented in Out-of-Country.