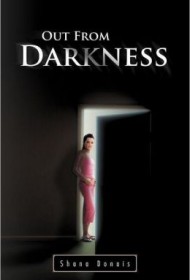 Out From Darkness is a short novel about one woman’s triumph over adversity. It’s a fast-paced story that, while uneven, demonstrates much potential.

Aiara, a high school student, is the overachieving daughter of a drug-addicted prostitute. Her mother’s boyfriend physically and sexually abuses her, but thanks to a nice boy at school, Aiara begins to piece her life together, even deciding to look for her long-lost dad. Soon things fall apart and Aiara is on the same path as her mother. After interventions by loyal friends and her new but devoted boyfriend, Aiara gets her life back on track.

The good news is that this is an inspirational story: Aiara is kind, and it’s nice to see her succeed. Author Shana Donais is just 18 years old herself, and she has created a full cast of characters and a complex plot. The difficulty is that she has shoehorned them all into a mere 71 pages, making this story read more like an outline than a novel. Within six pages, readers hear about drug abuse, rape, abandonment, and truancy. There’s no time for Donais to develop a writing style; we just get shuttled from plot point to plot point at breakneck speed.

There are many engaging moments here — a flashback to Aiara ice skating with her father when she was two years old is touching, and her brief conversion to a quasi-bad girl has echoes of Sandy in Grease — but the various story elements need more description, more embellishment, just…more! This is a promising start, but it leaves the reader wanting a deeper connection with the characters and story.