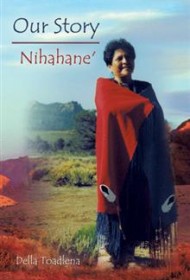 Our Story: NihahanÃ© by Della Toadlena is a memoir following the life of a Navajo woman who grew up on a reservation and attended a Bureau of Indian Affairs boarding school. The book begins with the history of Toadlena’s people and ends with her present-day life as a grandmother and retired college professor.

The author wrote the book as a way of documenting her family’s history for her grandchildren and future generations. As such, it has the conversational tone of a wise grandmother telling her stories of days gone by. Readers of all ethnicities will find an inside look at Navajo culture and history, including traditional peyote-, coming-of-age- and protection-ceremonies.

Although some mundane details will likely be more interesting to Toadlena’s family members, other vignettes are fascinating, such as her supernatural experiences tied in with Navajo lore (one of the most memorable being a warning apparition that appeared during a traditional Navajo Blessing Way ceremony). Parts of Toadlena’s life story aren’t upbeat, including passages in which she divulges that she was the victim of sexual abuse by a teacher and had come close to losing her son in a tragic fall. But the sad parts are somewhat balanced by Toadlena’s obvious deep love for her family and culture. And one can’t help but cheer for the author when she earns a master’s degree and begins teaching college courses later in life, years after being told she hadn’t scored high enough on an exam to warrant attending college as an undergraduate

Although the prose could be more tightly written, this is a poignant and engaging look at a little-known world. The short length makes it an easy and informative read.