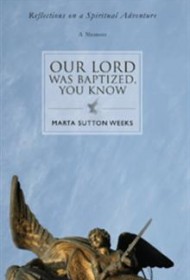 Marta Sutton Weeks’s journey from reluctant Mormon to Episcopal priest covered many years and much of the globe. Her book, Our Lord Was Baptized, You Know, takes readers along for the ride.

Weeks was raised in both South America, where her father worked as a geologist, and in the family home in Utah. Since her mother had little regard for religion after leaving Mormonism, young Marta absorbed her mother’s negativity regarding the religion.

Her journey to finding God — or perhaps the journey of being pursued by God — took place slowly. When her future mother-in-law requested that Marta be baptized prior to the wedding, she agreed. The Episcopal bishop explained the rite, saying, “Christian initiation is mentioned in the Bible. Our Lord was baptized, you know.”

Weeks had never heard this, and it gave baptism new meaning for her. Years would pass, though, before she entered ministry; she was ordained at age 62.

Seminary was not easy for Weeks. When she didn’t pass the General Ordination Exams the first time, she received no explanations about why her answers were not acceptable; instead, she was required to take seven more exams.

She first intended this book for other women in the process of ordination, so that they could “compare how things had changed over the years, hopefully for the better.” But as she wrote, her life in general found its way onto the pages. Chapters discuss the influence of Mormonism on her childhood, her work with her husband’s international petroleum company, the death of a son in a helicopter crash, world travel, ministry assignments, and more.

This book is well written, but lacks the tight focus seen in most memoirs. Women entering ministry might appreciate Weeks’ perspective, and readers interested in mainline Christianity, Mormonism, or the petroleum industry may find sections of the book informative. However, the book’s audience is most likely to be those who have a personal relationship with the author.