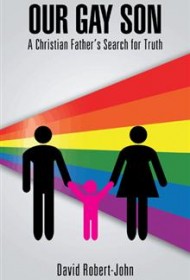 “Mum and Dad, I have something to tell you.” So began the conversation that upset David Robert-John’s comfortable life, nearly ended his marriage and ultimately derailed his evangelical Christian faith. In Our Gay Son, the author shares the painful spiritual process of reconciling his youngest son’s disclosure with his beliefs that homosexuality is an abomination often caused by inadequate parenting and can be resolved with prayer.

Robert-John’s writing is at its best in the first half of the book, when he explains the roots of his religious conversion and describes the seven years he spent as a missionary teacher in war-torn Uganda. He relied on prayer to help impoverished villagers stop drinking and curb domestic violence and trusted God to help him recover from malaria and survive encounters with Idi Amin’s firing squads.

Back in England, Robert-John became obsessed with the power of prayer to heal homosexuality, driving his wife away with his fanaticism. When his efforts failed to “cure” his son, Robert-John was shunned by his congregation. He confides that writing the book became his emotional release.

His training as a science teacher takes over in the second half, slowing the pace and changing the book’s tenor. He scours scientific journals, ultimately rejecting organized religion, but soon begins a campaign to convert fundamentalist, Catholic, Anglican and Islamic religious leaders to his new view that religious condemnation of homosexuals is based on faulty logic. Chapters written by his wife and son reflect a weariness with this crusade that readers may also experience. The author wisely split much of his biblical research into a second book, but even more paring would help preserve the integrity of this memoir.