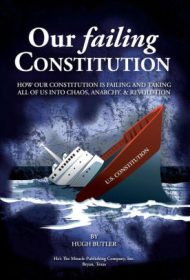 For Hugh Butler, the U.S. Constitution is an antiquated, inflexible document that fails to adequately respond to societal changes. His prescription is a thorough revision of the nation’s founding text that he argues is responsible for America’s current tribulations, of which President Donald Trump is but a symptom.

Without his reforms, Butler argues, a Republican-controlled federal government that serves an ultra-rich plutocracy will be America’s ruination by replacing democracy with a wealthy oligarchy. In its quest, this wealthy cabal, assisted by a subservient right-wing media, has engineered the racism, income inequities and other causes of America’s present crisis.

Butler would replace the Constitution with a lengthy, detailed document that, while proclaiming to protect individual and states’ rights, concentrates power in Washington. Structural changes include the elimination of the Electoral College and an elected board of directors running the executive branch instead of the president. Representatives would be elected statewide instead of from individual districts.

Other reforms are likely to be more controversial, including: a national ID card for everyone, a federal license required to run a business, universal conscription for military or public service, fines or loss of citizenship for failing to vote, grading of parents’ child-rearing skills and a loyalty oath for all.

Raising questions about the Constitution is fair game, but Butler mars his argument with the kind of raw personal attacks that characterize the uncivil society he attacks. For example, he compares Trump with Hitler and Trump’s supporters with “blind” Germans who backed the monster. At one point, he writes: “I regard the efforts of…the radical ultra-wealthy, Fox News, and the Russians and the Trump Campaign as un-American and treasonous.” Such inflammatory discourse undermines any serious discussion of the issues.

There are many problems facing our country, and some of the reforms mentioned here are worth debate. But others are highly questionable, as is their presentation. Ultimately, many readers will find this a misguided attack on the Constitution and values they cherish.