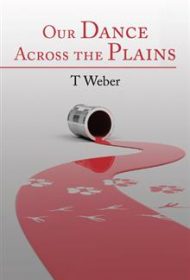 As Napoleon the Pig and Winnie-the-Pooh can tell you, literary anthropomorphism inevitably signals allegory. A passionate English environmentalist and anti-globalist writing as “T Weber” follows suit here, likely drawing inspiration from Animal Farm, Watership Down and Tolkien’s vast menageries, to construct a dark and richly-detailed dystopia where the law states: “Dance, Play and All Associated Forms of Happiness—PROHIBITED.”

The rulers of this evil domain (capital city: Baleyard) include a pack of nasty rats called the White Coats; a cabal of political/business overlords, the Mighty 85, and a ruthless materialist called Bog Nose, who’s part skunk, part wombat. All of them are bent on poisoning the earth and subjugating its citizens in the name of profit.

Weber’s heroes? A pair of democratized freedom fighters, Crow and Coyote, and their allies from many other species. A writer, deep thinker and earth mother, central character Crow can survey this “overbearing intransigent society” flying above, but her battle for justice is on the ground.

Weber sometimes gets mired in his details. There are so many dejected street dogs, scheming porcupines, assorted lizards, wild cats, and other creatures that readers can feel overwhelmed, and the writer’s humanitarian message sometimes becomes obscured. His prose can also be rambling and overwrought: “Many folk of creature-kind came to look, clearly see and retain anything that could be recognized as realistic in universal thought or in acceptable working order. Homes and health lost out to the devilment wreaking havoc…”

Still, this wry, unfailingly clever fable has real power. In an age of global disorder and vast discontent, Weber gives us keen social wisdom from birds and beasts, who sometimes offer hope, as well. “This, you surely must agree, Crow, is a wonderful moment to live in, to be born in,” assures a character named Vehuiah, ” …Every snatch of time is unique, so how can we possibly be glum…?”